Visual Maps of the Filipino Blogosphere 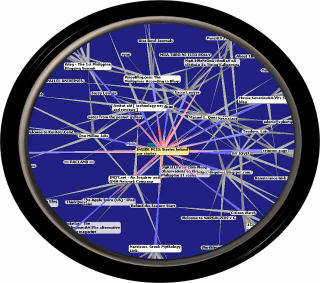 The TouchGraph GoogleBrowser is one of the coolest tools for exploring various regions of the World Wide Web, including the local Filipino Blogosphere or "blogsphere" which I prefer. If, after reading this post you enthusiastically agree with me, please promise to put a link on your site to Philippine Commentary out of sheer gratitude! TouchGraph is an interactive tool for visualizing the local topology or structure of a network by showing how various websites are interconnected together starting at a URL address that the user selects.
For example, this is the TouchGraph map (click to magnify) that is generated of the Filipino blogosphere "centered" at the blog of the Philippine Center for Investigative Journalism (PCIJ) which played such a pivotal role in the unfolding of the Gloriagate crisis (still ongoing).

You can see at the center of the screenshot is the PCIJ blogsite (yellow) heavily linked to and by red and blue lines with the other major websites that comprise the Filipino blogsphere. You can actually display all such interconnections by double clicking on the "center of the blogosphere" site, in this case PCIJ, to bring up sites that are not as heavily linked to by PCIJ.

All the heavy hitters to and from the PCIJ site are arranged roughly in concentric circles around the central site with radial distance proportional to "click distance. " Even without knowing anything about the Philippines or the Filipino blogosphere, one can tell that closely associated to this site and occupying the first "link orbital" are Manuel L. Quezon III; the Philippine Daily Inquirer and GMA network's toprated website, INQ7; the blogspot of Conrado de Quiros; and a constellation of blogs and mainstream news websites: By Jove!; The Sassy Lawyer; John Nery's Newsstand; John Marzan's Philippine Politics '04; The J-Spot;Yuga; Renaissance Girl; PinoyTopBlogs, etc.

EVERYONE'S here. Go to TouchGraph and see for yourself.

The graph above is actually a highly detailed map whose static and dynamic features are best appreciated live. You can switch center of the universe focus and watch as TouchGraph rearranges everything in a dance of planets kind of ballet as the linked websites fall into graphical orbit. Bloghopping was never like this!

There is of course nothing special about the starting URL in the above image. Any website can be the center of blogosphere display. I just happened to have chosen the PCIJ site as the center of the universe for this run of the TouchGraph rendition of the Filipino blogosphere around their site. You can click on any of the sites in view and Touchgraph will show you the local portion of the World Wide Web that is connected to that site. By doubleclicking on your central site, TouchGraph will dig deeper into the link-manifold that contains it and shows you more and more sites connected, directly or indirectly to it. You don't need to keep re-entering URLs because you can just click on any site visible to move the "center" or focus of the survey of the local blogosphere. You can click and drag on a site to see which other sites are so heavily linked to it that they are "carried along" as you nudge the center site. Amazing what you can learn about who is connecting to whom with this program, how strong the links are between them and much else besides.

Other interesting center point URLs I've explored, which might be of interest to the conspiracy theorists in the crowd, are any of the well-known CPP/NPA/NDF websites, which produces some intriguing linkages.

But my favorite is a map I generated and traversed with the Philippine Daily Inquirer as center of the local blogosphere map. You can see all the Main Stream Media websites together like a tight flotilla of yellow journalism (with a few exceptions) or, if I may coin a Blogosphere Neologism

DEMAGAGOSPHERE n. isang lugar kung saan ginagago ang mga taong bayan.(A place where they try to fool all the people all the time).


This term actually came up in a conversation over at the Newsstand yesterday, where John Nery has observed the need to challenge the AM radio stations, as part of his contribution to the recently held Bloggers-Journalists conference sponsored by PCIJ. Hat tip to Edwin Lacierda of San Juan Gossip Mills for perfecting the term. Please notice it has Greek (demos), Pilipino (gago) and English (sphere) components.

PALACE VENTRILOQUIST'S DUMMIES The radio medium is the quintessential demagagosphere, especially the AM band that is listened too by the C, D, and E socioeconomic classes almost universally--this according to many scientific surveys. AM Radio was indeed a major factor in the Palace's defensive strategy during the last six months of the Gloriagate controversy, and still is. An astute listener can tune in to a number of key AM radio stations, and immediately detect a surprisingly similar (even verbatim) enunciation of the earliest interview that day from Ignacio Bunye, the Palace spokesman. In Metro Manila, I get the impression that between 80-90% of the medium was heavily influenced if not effectively controlled by the Palace media machine. In the provinces, the capture ration was 100%, I would say.

The Palace understood the demagagosphere comprehensively and utilized it to its fullest potential to head off any runaway public outrage that could have lead to another people power revolt at various points during the last six months. This operation has turned the demagagosphere into an efficient and real-life Orwellian thought-control machine, Pinoy-style, that would've made Izvestia or Pravda proud in the old Soviet Union. Here is how you can see this demagagosphere in operation. Just tune into the earliest interview of the day with Palace Media Czar Ignacio Bunye and carefully note his main talking points. Then throughout the day if you tune into various captive stations you will hear a surprisingly uniform (at times, verbatim!) chorus of echoes from the voices in the demagagosphere. There are exceptions as John Nery valiantly points out, but it is a swamp completely dominated by the Attack and Collect, Defend and Collect culture of corruption in the Mainstream Media. The demagagosphere is just another cultural swamp that needs to be drained and repopulated with...audio bloggers!

(Well, linguistics is a pastime of free peoples, so let us make hay while the sun shines. But in a true clampdown, TouchGraph could be a dangerous tool in the hands of the authorities. So it pays to know what they could know about you and your website.)

DIAMETER OF THE BLOGOSPHERE Every physical sphere, like a basketball or the earth, has a diameter, which characterizes "how big" such round objects are. The diameter of a sphere is the largest possible straight line distance between two points on the sphere's surface. For example the North and South Poles are at opposite ends of a line segment going through the center of the earth (neglecting of course a slight flattening of the earth's curvature near the Poles!).

By analogy, does it make any sense at all to ask what the diameter of the blogosphere is, or the World Wide Web as a whole? Well if you model the blogosphere as some collection of websites interconnected by links, the following questions seems to be a reasonable one to ask: "Given any two websites or webpages, what is the maximum number of links that must be traversed by clicking on the appropriate hypertext hotspot, to get from one to the other?"
Posted By: Deany Bocobo
On Monday, October 24, 2005