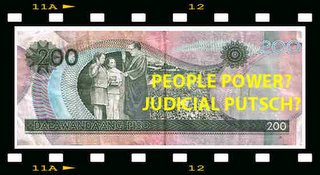 -MINUS IN HISTORY AND CONSTITUTIONAL LAW.
That is the grade that retiring CHIEF JUSTICE HILARIO G. DAVIDE, Jr., deserves for his seven years of unrepentant, militant JUDICIAL ACTIVISM as helmsman of the Supreme Court of the Philippines. In The Paradox of People Power I have laid out as carefully as I can, the central role Davide played in the JUDICIAL PUTSCH that unexpectedly crowned EDSA II with a sudden victory that surprised the angry throngs at the EDSA Shrine on 20 January 2001, almost as much as it did the hapless, incompetent dipsomaniacal but democratically-elected Joseph Estrada. Only the ceaseless mythologizing of that so-called people power event has obscured the COUP D'ETAT that was at the heart of its success. Above is reproduced the TWO HUNDRED PESO BILL (yes it exists! it was released in late 2002 as legal tender [sic!]) that immortalizes that day of infamy. I cannot imagine a darker day for Philippine democracy and its system of checks and balances than when LUCIO TAN, allegedly the biggest tax-evader in Philippine History and the biggest Filipino-Chinese taipan, recommended Davide to the same Joseph Estrada in 1998, and Davide became Chief Justice of the Supreme Court. Considering everything Davide did in that lofty post to DISHONOR the cause of JUSTICE and LIBERTY for all in this archipelago, I cannot conversely imagine a brighter day than today, for starting today such abominations as Estrada vs. Arroyo (March 2001) and Estrada vs. Desierto (April 2001) , and a whole string of questionable other decisions -- the quashing of the Automated Counting System of the Commission on Elections in December, 2003, just months before they should have been used, and the PIATCO-Fraport AG fiasco -- all these Davide Court decisions come closer to being REVERSED and ABJURED by a more JUDICIOUS and CONSTITUTION-LOVING edition of the Supreme Court. I can't see how any Law School can teach these Decisions with any kind of intellectual honesty and consistency, because even English Composition Majors can see what is morally wrong with them. If one is to mourn the utter moral and legal chaos in the Justice system, or decry the wider depravities that are so evident in the GRIDLOCK between the government's various branches, or wonder at the MULTIPLE ORGAN FAILURE of our institutions, one need look no further for the root of these evils than in the devastation wrought by the Davide judicial train wreck beginning on 20 January 2001. The Day Davide strangled Democracy but everybody celebrated PEOPLE POWER. The country is still paying for that blind injustice. Justice hurried was Justice buried! RELATED POSTS can be found here.

FREEDOM HOUSE AGREES? In a stunning confirmation of above dour assessment of the state of Philippine Democracy, today's 2006 Global Survey of "Freedom in the World" DOWNGRADES the Philippines from FREE to PARTLY FREE.

This is SERIOUS. Looks like Freedom House even knows about GLORIAGATE.
Well maybe this will force those DARN Filipino-American leaders in America to pull their heads out of the sand and quit acting as footmen for the Palace whenever its tenant pays a state visit to their fiefdoms in Daly City and New Jersey. I'm talking about people like YOU Loida Nicolas Lewis, with all your billion of dollars at Beatrice Foods, and YOU Rodel Rodis, President of the San Francisco City School Board, and all you 4 million loyal Filipino American doctors, nurses, teachers, lawyers, soldiers, community leaders, who are pillars of your communties -- shamefully silent over there on the Continent, safe and secure in Liberty's glorious protection. While here in the Archipelago, we are merely PARTLY FREE!

[NOTICE] Philippine Commentary posts are long but Printer Friendly. Use your Browsers File & Print commands to make nice print-outs of any post. And if you click on the main headline of any post, you will open up the unique web page of that post including all Reader Comments. If you have a blogger account you can join the discussion. All Philippine Commentaries are hereby donated to the PUBLIC DOMAIN forever by its author(s). They may be used free of charge for any lawful and moral purpose that promotes Justice and Liberty for all. All other uses are expressly forbidden. DEAN JORGE BOCOBO
Posted By: Deany Bocobo
On Tuesday, December 20, 2005

A WARM WELCOME TRAVELER.
Welcome to the Archipelago Where the Capi and Consiglieri rule together while the People think they have the Power.

Wishful thinking but I hope the next SC chief bows to no One!

Thank you for a fitting eulogy for the departed Supreme Court Chief Injustice Davide.

I have heard lots about the way the country's major tax evader Lucio Tan has managed to gag the Supreme Court - with money.

There are a couple of recent appointees to the SC who belong to the guild of non-judicious and while they are there (one is a very known FVR legalist and proponent of save Lucio Tan campaign).

I've also heard from A1 sources that Lucio Tan wanted Davide badly for the post and "pressured" Max Soliven to support him with Erap.

How money can corrupt even the most well-meaning people! As we all know, dirty money smells rosey even to princes of the Church.

Not so fast Hillblogger. There is this persistent rumor that Davide wants the OMBUDSMANSHIP...to continue reforming the Judiciary. Wouldn't that be interesting?

he offers no program
just continuity...

A lot of what we know about Edsa II actually comes from the TALKATIVE new Chief Justice Art Panganiban. It was in a speech to seminarians at UST a year after Edsa II that Justice Panganiban first talked in public about CJD's fine Saturday in 2001...But I notice FREEDOM HOUSE has downgraded the RP to PARTLY FREE. I wonder why?

Yes, if the man is that talkative, it would be great to make him the new darling of the media - to make him talk about the past, the present and even the future "activities" of the SC in relation to Gloria, her ascension to power, her tenure, atbp.

You can't be serious? Davide for Ombudsman? Good Lord, the country is on the brink of total lunacy.

Davide is the Philippine version of Barras, Robespierre's corrupt colleague in the directorate during the French Revolution era...
Barras was the consumate corrupt and opportunistic "legalist" of his time. When Robespierre was guillotined, Barras, ever the opportunist, went away on a self-exile was impoverished.

All in all, the Robespierre government's reign of terror and corruption lasted 4 years. The Philippine Jacobins' time is almost up. Davide better watch out!

Panganiban as Chief Justice? We are really scraping the bottom of the black pot. GMA appointed him and is daring everybody to either put up or shut up.
Rizalist, where are the youth of the land? They laugh at the foolishness of General Abat, but I want to tell them: "That's not foolishness but COURAGE, which you all lack."
Ang sigaw ng mga kabataan ay "Kung hindi ngayon, kelan? Kung hindi ikaw, sino?" Pero nasaan na nga ba kayo?
It seems that like FVR you want all things stacked in your favor before you act. That's not how a hero is born. A hero takes risks against all odds. I am disgusted because of your derision of Abat when he just rose up because he got tired waiting for any youth to stand up. He got tired waiting, so he himself stood up.
Rizalist, where are the youth of land? Sigurista bang lahat sila? Hinihintay ba muna nilang pumutok ang bayan at mag-alsa at saka nila pangungunahan ang mga ito? Ano sila, masaya?

Hillblogger--The thinking is that he somehow needs immunity from criminal and civil suit. Ombudsman would give him that. But perhaps there is also the danger that someone else in that position will be touched by an angel or something and decide to work on the 50,000 corruption cases that our "reformed Judiciary" has backlogged in the SANDIGAN BAYAN alone.

BFR--Apathy can be a form of protest too. Also we cannot discount some recent statistics, for example that one in two families has relatives abroad and/or rely on them for financial support.

Where are the youth?

They are making it BIG TIME in San Francisco, Chicago, Detroit, New York, London, Paris, Tokyo, and everywhere that their instinctive recognition of LIBERTY tells them, here, we can have a Merry Christmas and a safe and prosperous NEW YEAR!

My wish for us all!

I'm certain you have read the period of French history on the French Revolution.

Pinoys may think I'm barking mad because I keep relating the events during the revolution era in France from 1789 onwards to the events in the Philippines of 2000 onwards.

Frankly there are more similarities than one between the state of affairs during the French Revolution era (touching after the fall of La Bastille) and the current situation in the Philippines.

I'm trying to find a similar book in English (the ones I've read are all in French) - not just a synopsis of events - to send to you and as soon as I've found one either in the UK or on the continent, I will send it to you.

The history French revolution is a study of human nature (all that is bad and all that is good come out during a revolution), politics, government, corruption, war of attrition and how historical events when they are repeated may shape things for the better.

As we say, history has a way of repeating itself.

Thanks Hillblogger! Only lately have I had occasion to really look at the French Revolution since college days. Can't read or speak the language, which is a real pity, I know. So I appreciate your inputs on the matter. I guess culturally I am "too" American. It's the language that chooses us you know, not us choosing the language. One of my favorite sites is a place called ALBION'S SEEDLINGS which is very Anglophilic. I'd appreciate links from you of French or European sites that you think represent the best of certain nationalities or European points of view to give our readers here a broader exposure. I think Filipinos don't spend enough time "abroad" and instead stay local in their bloghopping. That is so limited!

I hope you and your family have a blessed Christmas!

Two thousand years ago JESUS CHRIST was born in that little town of Bethlehem. The Infinite God became Finite in order for man to be generated of God by His Holy Blood and thereby be born again as Children of God. So that we can be worthy of seeing and entering the Kingdom of God, IF WE BELIEVE! A BLESSED CHRISTMAS TO ALL OF YOU BLOGGERS!