Whither Pugad Baboy? Whither PDI?

Pugad Baboy’s strip on June 4 spoke of religious hypocrisy toward gays and lesbians. It singled out St. Scholastica’s College for purportedly tolerating lesbian relationships among its students, suggesting that the nuns themselves might be lesbians. On June 6, the Inquirer apologized for the derogatory cartoon that imputed to the nuns policies, practices and sexual preferences inconsistent with their faith.


Reassured by an internal inquiry, RCP lays the predicate for a defense...

Our Reader’s Advocate, Elena E. Pernia, has conducted an inquiry and her findings are most assuring. She found that the comic strip was rejected by the art section precisely for insensitivity when it was first submitted last April. It was a sound exercise of editorial discretion within the art section, and the author accepted it. The strip was published on June 4 by mistake—a technical mix-up in the art section—showing that there was no intent to malign, that editorial judgment had been exercised responsibly, and that the author himself, to his credit, had accepted that editorial decision.

...but immediately confesses to oral or printed defamation:

Indeed, after the offending strip was inadvertently published, Pol Medina apologized to the St. Scholastica sisters and admitted that the cartoon had crossed the line. In constitutional law, cartoon art is protected speech, but when it becomes defamatory, it loses its constitutional protection especially when the victim is a private person and not a public figure. That is why defamatory speech is punished under the Revised Penal Code.


Still the old passion for reason runs strong in Raul Pangalangan and so he stares at the scales of Justice:

Since the defamatory nature of the cartoon was admitted by the author himself, one would have to be more popish than the pope to say it ain’t so. On the other hand, I can actually imagine a number of defenses. There was no malicious intent, as shown earlier. It was a cartoon, not a news item that purports to state facts. And—while truth is no defense and malice is assumed in every defamatory imputation—some readers have pointed out that Pugad Baboy merely speaks of a practice rather widespread in many same-sex schools. But the fact remains that St. Scholastica’s College was singled out for ridicule even if it hadn’t provoked or invited such attention. The slur was gratuitous. The situation called for an apology.

...concluding that the gratuitousness of singling out St. Scholastica "called for an apology" while mentioning Readers' comments  that Pugad Baboy merely spoke of "a practice rather widespread in many same-sex schools."

Well then.  Many PDI Readers may now note that the rumored widespread and possibly condoned gay and lesbian homosexuality in private Catholic schools such as St. Scholastica, had not hitherto been confirmed, in a perhaps unintended but unmistakable a manner and in so authoritative a space as the Philippine Daily Inquirer's Publisher's Note!

PDI: 'It's a Misconception that  Pol Medina was fired.'

Another misconception is that Medina was fired. This is not true, and the Inquirer categorically stated on June 6 that he remained a contributor. It further announced: “Pugad Baboy will not appear in the Inquirer, however, pending further investigation.” This was a reasonable measure while the Reader’s Advocate was still ascertaining the facts.

On the morning of June 8, the Reader’s Advocate concluded that the entire problem stemmed from the erroneous uploading of an already rejected file, recognized Medina’s forthright apology for the injury it had caused, and unqualifiedly recommended the resumption of Pugad Baboy’s publication. However, Medina soon after announced that he was resigning from the Inquirer for having “dishonored” it.

PDI: 'It's not Pol Medina's anti-Church or anti-Marcos stance.'

In interviews and online posts, Medina contends that his anti-Church and anti-Marcos stance is why he is in Dutch with this newspaper that began running his comic strip in May 1988. This is absolutely false.

Even he will acknowledge that the Inquirer upholds free and responsible expression, and that censorship of political views is not part of its policies. (And this controversy would have been avoided had Medina responded to the calls of his Inquirer colleagues instead of putting himself out of reach.)

On the first issue, various Inquirer columnists have been similarly critical of the Church in the Philippines. They have defended the artist Mideo Cruz for his irreverent collage “Politeismo” and Carlos Celdran for the “Damaso” incident in the Manila Cathedral. Medina’s strip on gay love in Catholic girls’ schools takes the same critical stance, but what made it objectionable was that it crossed the line by singling out by name a specific group.

On the second issue, suffice it to say that Medina’s anti-Marcos strips should also place him in the same camp as many Inquirer columnists who opposed the dictator during those days when doing so entailed risking life and limb.

But even if Medina deviates from the editorial position of the Inquirer, he has no reason to fret. The dean of the Inquirer’s corps of cartoonists, Jess Abrera, has differed fundamentally with many of us in the Inquirer on the issue of reproductive health, and to this day continues to draw his anti-RH editorial cartoons even while the editorial and certain columns cheer the passage of the RH Law!

The cartoon medium works by being bold and irreverent, and by pushing the outer limits of public discourse within the bounds of decency.  The Inquirer will continue to support Filipino cartoonists the way it discovered Medina and featured his work through the years. Aspiring Filipino cartoon artists are invited to send samples of their work (e-mail to arts@inquirer.com.ph under the heading: “comics contribution”).


RAUL PANGALANGAN ends with this:

We are prepared to nurture the next generation of cartoon artists who will engage this democratic space, who will make us both laugh and think. 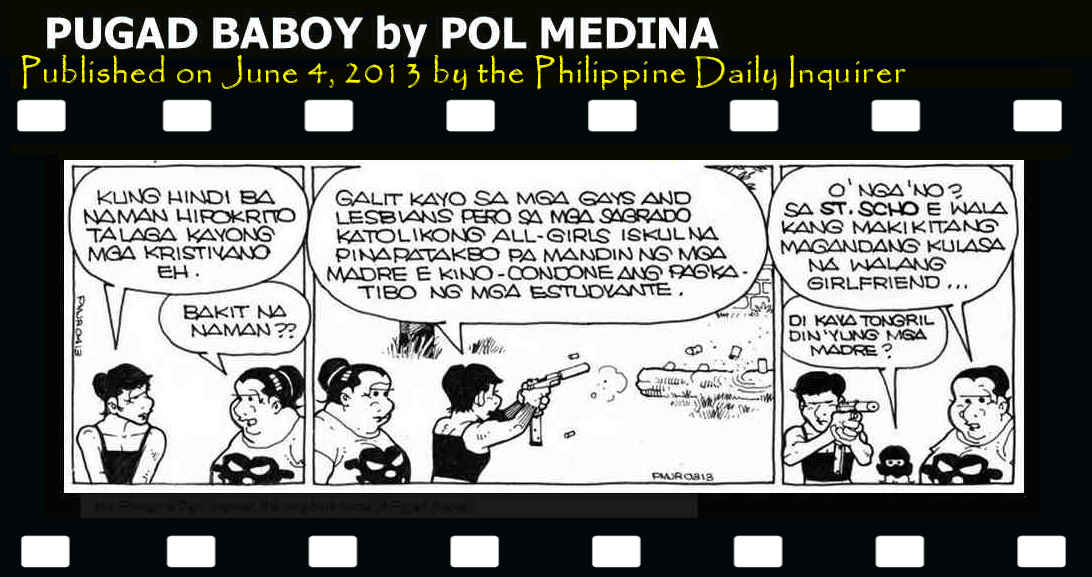 BOLD PREDICTION: Pol Medina and PDI will kiss and make up!

Defamation—also called calumny, vilification, or traducement—is the communication of a false statement that harms the reputation of an individual, business, product, group, government, religion, or nation. Most jurisdictions allow legal action to deter various kinds of defamation and retaliate against groundless criticism.
Under common law, to constitute defamation, a claim must generally be false and have been made to someone other than the person defamed.[1] Some common law jurisdictions also distinguish between spoken defamation, called slander, and defamation in other media such as printed words or images, called libel.[2]
Similar to defamation is public disclosure of private facts, which arises where one person reveals information that is not of public concern, and the release of which would offend a reasonable person. "Unlike [with] libel, truth is not a defense for invasion of privacy."[3][not verified in body]. False light laws protect against statements which are not technically false but misleading.[4]
In some civil law jurisdictions, defamation is treated as a crime rather than a civil wrong.[5] The United Nations Commission on Human Rights ruled in 2012 that the criminalization of libel violates freedom of expression and is inconsistent with Article 19 of the International Covenant on Civil and Political Rights.[6]
A person who defames another may be called a "famacide", "defamer", or "slanderer".


Was Pol Medina acting as a "famacide, defamer or slanderer" by causing the "communication of a false statement" that perhaps "harms the reputation" of St. Scholastica by imputing to it (and other private Catholic schools) HYPOCRISY?

For some reason, the PDI Publisher's Note gives me to understand that the basic accusation contained in the cartoon is true, or that it is believed by so many people to BE true, as to be called "common knowledge"?  Though I or you may not have personally KNOWN the accusation to be true when the cartoon was published is irrelevant to its alleged or even apparent truth, which no one has yet DENIED, not even the St. Scholastica nuns.

I do not agree with the  PDI Publisher in concluding that (a) the cartoon was DEFAMATORY or that (b) it had lost its Constitutional protection as free speech.

I also do not agree with the PDI Publisher that "St. Scholastica" is the equivalent of a private person. PDI editorials of recent vintage have amply criticized the Catholic Church for political meddling and even political blackmail of civic leaders to exert pressure on key issues of interest such as the RH Law and other progressive social measures in Congress and the government.

I think the Pugad Baboy Cartoon legitimate raises the issue of HYPOCRISY on the part of such private religious institutions. While the Organized Religion buggers Congress over legislation on reproductive health, women's rights, divorce, violence against women and children, etc. it has many skeletons in it's own Closets!

With a former Dean of the University of the Philippines College of Law as its Publisher, the Philippine Daily Inquirer is more than capable of defending itself legally in this, and any of the other thousand LIBEL and DEFAMATION cases that PDI eats for breakfast.
Posted By: DJB
On Sunday, June 16, 2013