The Separate Departments of Justice and Diplomacy 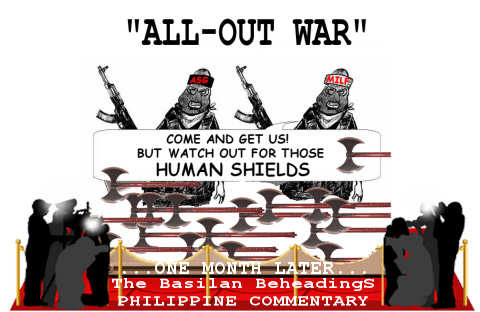 Instead, the usual moro-moro is underway as thousands of Philippine Marines arrive on Basilan Island to assist police forces that will serve arrest warrants issued by Basilan Judge Leo Principe against 130 suspects, after a month of the government fiddling around waiting to get ASEAN out of the way...

But little do the soldiers and police know that the Mass Media is already stacking the deck against them in the aftermath of whatever happens now. It's a game the Media mastered years ago and the sure fire tricks are already in play.

During the last few days, the airwaves and front pages have been filled with heart-tugging images of young school children and foreign and local PEACE ACTIVISTS calling for well...peace. (Not Justice mind you, but peace.) An interesting vignette has a piously veiled peace activist in Basilan saying they just want peace to avoid "psychological damage" to the children of Tipo-tipo.

Strange, but there was no mention of the "psychological damage" the deadly ambushcade and scavengers' beheadings of ten soldiers might have already done, but oh yeah, there's plenty of fear over "all-out war" by the government.

This morning in Manila, media reports have variously claimed that a "NEWS BLACKOUT" and a "FOOD BLOCKADE" have accompanied the "MASSIVE MILITARY BUILDUP" in preparation for "ALL-OUT WAR." --all of which have been officially denied as the government does its own shaping of the battleground by fielding medical teams and mobile clinics, which the President yesterday declared must not be attacked by rebels, "or Hades will come to you."

Esperon, Cedo and Allaga Must Resign

Whatever happened to the much-talked-about AFP offensive?

After a week, the President announced an additional three-day delay in the offensive while waiting for some kind of report from monitors on the ground. These two deadlines passed and then we were treated to the sight of PNP officers trying to serve warrants of arrest in a ghost village which obviously had been vacated by the inhabitants earlier.

In the first place, what did the AFP expect—the MILF/Abu Sayyaf would surrender the culprits without a fight? Even my barber Mang Dennis said he couldn’t believe that people could be so naïve. But he tried to console me by saying, “Kawawa naman ang AFP.”

A Marine unit of some 100 men is sent through so-called MILF-controlled territory on a search mission for Father Bossi, the kidnapped Italian priest. On the way back, they are ambushed by MILF/Abu bandits.

For some reason, rescue troops are unable to reach and support the unit. Air support is not available because of communication problems.

Twelve Marines are dead. Some are tortured before being beheaded.
Now I realize that in this country, public officials never resign or get fired—unless they belong to the wrong side of the political divide—for incompetence or negligence in the performance of duty.

But someone has to take responsibility for this terrible tragedy.

AFP Chief of Staff Gen. Hermogenes Esperon is the prime candidate for immediate retirement. (People are allergic to the word “resignation.”) As head of the Armed Forces, Esperon should know the meaning of command responsibility.

Lt. Gen. Eugenio V. Cedo is another candidate. Cedo is the chief of Western Mindanao Command (Wesmincom), which covers Basilan. He commands all ground, naval and air units in the area. When Esperon took over as chief of staff in July last year, he announced the breakup of Southern Command (Southcom) into two separate unified commands. One for Eastern Mindanao with headquarters in Davao City and another for Western Mindanao with Zamboanga as the headquarters. This was to ensure better utilization and concentration of forces against communist and Moro insurgencies. Events have shown that instead of resulting in greater efficiency, we only created more star positions for the AFP.

A third candidate is Maj. Gen. Nelson Allaga, the Marine corps commandant. He is responsible for keeping the Marines at the highest levels of combat efficiency. After all, the Marines along with the army scout rangers represent the elite of our Armed Forces. The manner in which the Basilan ambush took place and the inability of rescue elements to reach their beleaguered comrades speaks a lot about the current level of discipline and combat readiness of the Philippine Marines.

If we are to honor the sacrifice of our dead Marines and salvage what is left of the tattered reputation of the Armed Forces, these three individuals should go on immediate retirement.

Can you think of anyone else for your list, General, like maybe that do-nothing Commander in Chief? What do you think they've been waiting for?
Meanwhile, his neighbor, ISAGANI CRUZ, lambastes the Human Security Act of 2007, saying that "The pretext of protecting the nation against terrorists is a lame excuse." in order to "to assure President George W. Bush that GMA is still loyally supporting his campaign to combat international terrorism."

Well, it's still a free country, so Isagani Cruz is free NOT to support the campaign against international terrorism even if the vast majority of human beings most certainly do. He's even free to go live with room-mates Eid Kabbalu and Zulkifli Abdhir, for all I care.

But his further points deserve some consideration because unlike most of this law's public critics, it appears that Justice Cruz has at least read and tried to understand the structure and provisions of the law. He is clearly aware of the punitive provisions in the law against erring OR failing law enforcers (which number about ten to one in comparison to penalty provisions against terrorists!). But he is not impressed by the presence of these numerous provisions inserted to protect human rights and wrongful prosecutions under HSA 2007 because he claims that a corrupt Judiciary will make it easy for admin cohorts to take advantage of the law.

Stiff penalties are imposed for the commission of the crimes enumerated in its Section 3 that are already punished by the Revised Penal Code but are additionally condemned if they sow and create “a condition of widespread and extraordinary fear and panic among the populace, in order to coerce the government to give in to an unlawful demand.” This requirement can be easily established before a court of justice influenced by the cohorts of the administration or because of the inefficacy of our procedural rules, as in habeas corpus proceedings that are helplessly disarmed where the respondent simply denies custody of the person sought.

Poor Justice-Pundit Cruz seems to have gotten his arguments all mixed up, though!

In the above passage he claims that it is TOO EASY to prove the element of INTENT in the newly defined crime of terrorism because the courts are corrupt and can "easily be influenced by cohorts of the administration." Yet, in the same breath, he also complains that it is TOO HARD for the Courts to get results under a system governed by the Writ of Habeas Corpus.

I suppose this means that the good Justice-Pundit Cruz would therefore arm the Corrupt Court of the Cohorts with something so powerful as the Mexican Judicial Activist's Shabu Drug--the Writ of Amparo, by which the Armed Forces would virtually report to the Supreme Court.

A final histrionic ends his column, "...Let it also be especially noted, with alarm, that implementation of the HSA is under the supervision of the Anti-Terrorism Council composed of tractable Cabinet secretaries under the control of President Arroyo."

"With alarm??" But that's the way it works, somebody please tell him! Congress makes the law. The Executive implements it.

Former Chief Justice Art Panganiban meanwhile delivers a honey-coated confectionery paean to the Vision of Gaudencio Cardinal Rosales of Manila, whose bonbon ORATIO IMPERATA has had Masses of the Faithful kneeling in hot humid churches beseeching the heavens for rain.

How well the Catholic Church understands the psyche of the Filipinos! What chance is there that such a cunning gambit could fail anyway? I mean, what are the chances of a seemingly unanswered prayer for rain in an archipelago that always receives more than TWENTY typhoons per year?
Posted By: Deany Bocobo
On Tuesday, August 07, 2007

You criticise those who are against the HSA but also the same government and military that will put it into place.

Finally, I don't know how is it that the country is hit by twenty typhoons a year. From what I remember, there were only around six last year and they hit from October to December (outside the typhoon season?). The rains have finally arrived, but only after almost two months (they usually come at the start of June).

It is true that the Philippines gets an AVERAGE of 20 tropical cyclones a year, most of which don't make landfall. This statistic is just a mean

I don't see praying for rain as something unusual though. Religion does not deal with statistical uncertainty. Science, which is has equal teaching authority of religion when it deals with nature, has to deal with uncertainty.

The Cardinal Archbishop of Manila is heir to a long tradition dating back probably when consciousness evolved and with it religion. If I were in his place, I would pray for rain when the statistical probability for rain is high.

A master conjurer of miracles can expertly play the odds.