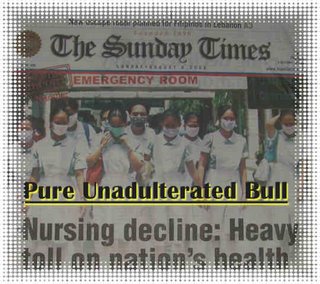 NO GREATER INDICTMENT exists of the failure of the Philippine ruling elite than the eight million Overseas Filipino Workers (OFWs), who have indeed voted with their feet and gotten jobs abroad, half of them in Americ a. But they are not allowed to just leave without the media's smug little punditocracy throwing politically correct brickbats at them and blaming THEM for that failure, either as unpatriotic traitors or as part of the "brain drain." At one time it was Conrado de Quiros and the Inquirer's "readers ombudsman" Raul Palabrica who derisively loved to call them "toilet bowl cleaners" of the world. And at left was yesterday's front page of the broadsheet Manila Times, which blames Filipino nurses for taking a "heavy toll on nation's health"(sic!).

PURE UNADULTERATED BULL! With a severe nursing shortage in the United States and starting salaries that are five to ten times the going rate of pay at government and private hospitals in the archipelago, the Filipino overseas nursing force accounts for a substantial portion of the now nearly $1 billion per month being officially repatriated by them to waiting families. But no, by leaving they are accused of not having a sense of nationalistic pride, of taking what meagre education is afforded them and using it for sustaining their children and kinfolk to benefit foreigners. Never mind that those foreigners and those children and kinfolk are al benefitting from the longest commute to and from work in human history. Never mind that they are among the Filipinos who are keeping the country afloat. But one can see the crab mentality even in one so stunningly successful and rich as Korina Sanchez of ABSCBN News when she interviewed a nurse from California. I thought I caught her mentally calculating what a simple R.N. was making per month there, which, including overtime pay and other perks can easily reach $10,000 a month, easily rivalling her own pay as the country's premier anchorperson! In the Manila Times story, note is made of the declining "pass rate" in the Nurses Licensure exam and the growing tide of health care works emigrating, including doctors becoming nurses to join the lucrative service area. Apparently in the 1970s, the passing rates were 80-85% of exam takers. In 1994, the reporter laments that it is "only" 42.42% (note the superfluous precision of the statistic). I ask, 42% of WHAT? Why of ten times the number ever since demand in the US, UK, and Europe has increased. So is there a nursing "shortage" in the Philippines resulting in a "decline" in health care. Of course not! we probably have ten times the number of trained and qualified nurses now as in the past. Not all or even most of them can leave and find work abroad. Hospitals may not be able to afford the best and the brightest of them, but that does not mean those who do stay are unqualified or are in short supply. Many other factors account for the low quality of health care in the Philippines, least of which are "unqualified" nurses. In fact, more and more families are able to afford good health care when they have a relative working abroad sending them money to PAY for such health care and medicines. The Filipino people know what OFWs are doing for them. It is our failed elites in society and especially in media that have got this whole OFW phenomenon all wrong! If anything, we should the press the advantage, train more nurses and health care workers, and take as much of the global market for them as we can. I don't see why we should keep them here to work in grim, desultory government hospitals (where people only go to die!) and pay them wages LESS than our emigrant domestic helpers in Lebanon! Speaking of which the game show Wowwowee scored a major coup last week by awarding P1 million peso prize to domestic helpers recently returned or returning from that war-torn country.

(To Philippine Commentary Regulars: Posting's been light the last few days coz I've been in Baguio City enjoying the resplendent sunshine and refreshing afternoon rains. The public market is bursting with fruits, vegetables and flowers and I have a fresh supply of Mountain Baraco coffee to keep up with y'all. Updates here all day...)

(10:00) Bernas On Lebanon Jesuit priest Fr. Joaquin Bernas is trying to understand the Israeli-Hezbollah conflict in Lebanon. On the one hand he says, "The Israeli strategy calls to mind the atrocities in Bosnia. In Bosnia, the destruction of villages and the mass annihilation of civilian populations were called genocide. We seem to have something similar here, but Israel is calling it nothing more than the creation of a buffer zone for the protection of northern Israel. The rules of war require that disproportionate force must not be used. " Is the use of Israeli force "disproportionate" however, when Fr. Bernas also admits in the same column that, "Israel’s response has been an unrelenting series of bombing raids intended to eliminate Hezbollah’s capacity to fight or to harass Israeli villages. But this is not happening. Hezbollah continues to send rockets flying into Israel." Perhaps, ineffective would be a more apt criticism, Father. As for "genocide" a la Bosnia, seems to me it was the U.S. and the West that saved tens of thousands of Muslims there from the likes of the Christians Slobodan Milosovicz and his ilk. I would suggest that this analogy is not only disproportionate but plain wrong! Proportionalists are really fence-sitters who can't decide which side to back so that the greatest good will come to the greatest number, eventually. They want an eye for eye in the same strict but ultimately absurd manner that Shakespeare once exposed Shylock to be guilty of. One innocent human life is too many, as the Israeli ambassador to the Philippines said of tv here last week, on either side. But in a conflict such as this, where no side can be called pure, I think that the most important objective is to prevent the far greater conflict and loss of life that could result if Hezbollah and its puppet-master Iran are not stopped from executing the real GENOCIDE they have declared undying commitment to. The new U.N. resolution on Lebanon recognizes this this need to disarm Hezbollah and strengthen the Lebanese govt so it can govern Lebanon without private religous terrorist armies threatening her neighbors and putting all of Lebanon's Christians, Muslims and, yes, even Filipinos in harm's way.

The nurses are heroes for their families. Their support for their country is incidental, because of the sheer scale of remittances and households receiving them. The whole is simply the sum of its parts.

Their hard work is that of ordinary, decent human beings. Not of some ignorant egghead expostulating on meaningless abstractions.

Nice to know that you are unwinding in Baguio.

dean, that kind of reporting by my former newspaper on the nurses are just another example of bullshit. i agree with you that the country's elites, or specifically the country's hospital owners, and that newspaper, simply dont respect the nurses. how much do nurses get here? P3,000-P6,000 a month. how much do they receive in the gulf states? U1,700/ a month. in America? US$4,000. they leave simply because hospital owners simply look at them as slaves. do they want to retain there here? no. despite all the talk of nursing shortages, wages of nurses have not moved an inch.

Guys,
It really makes me mad this sort of thing because it is an undercurrent of all the official "OFWs are national heroes" pronouncements that don't get muscle and money put behind it. Like the OWWA funds which funded that PhilHealth card giveaway gimmick of GMA's during the elections. It's really CRAB MENTALITY from those already on top of the local heap.

not to be churlish, dude, but the unadUlterated truth is that people will go where the money is, I think.

Good eye (not churlish) Postigo on my graphic. I always appreciate corrections. That comes with the turf

i can understand why many filipinos are forced to go abroad to earn a decent living-- kasi mahirap makahanap ng decent job sa pinas.

i believe (and know) we can do better.

A woman I was courting in the UAE was the secretary of our department. She said as a secretary in the UAE she was earning more than a doctor in the Philippines. This was in the UAE where they definitely base your salary on your passport.